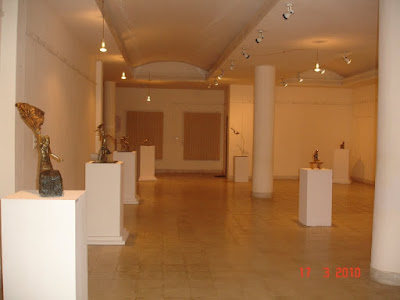 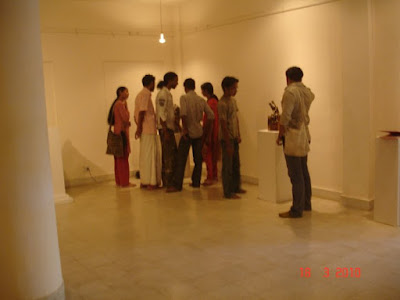 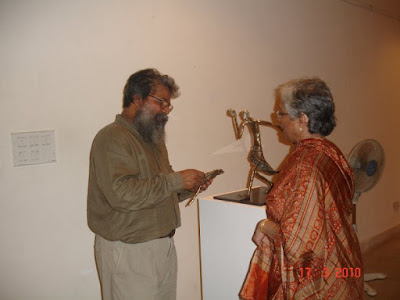 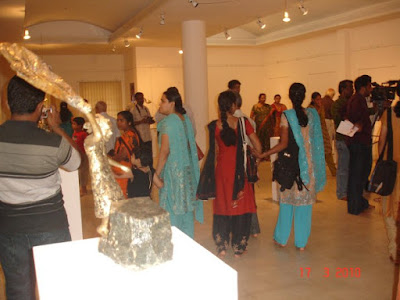 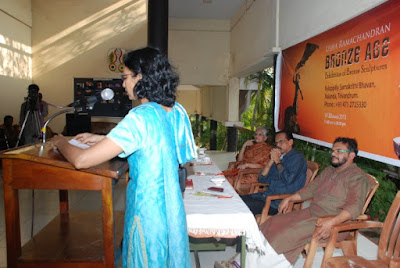 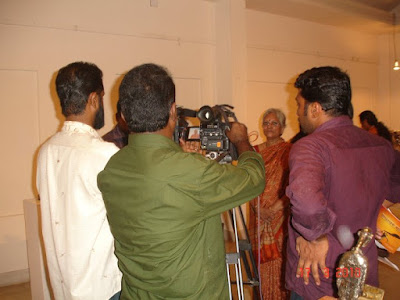 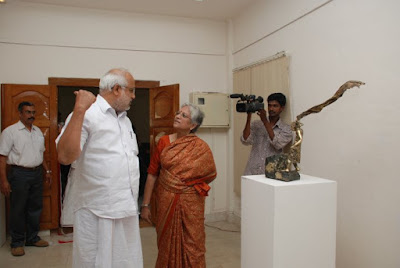 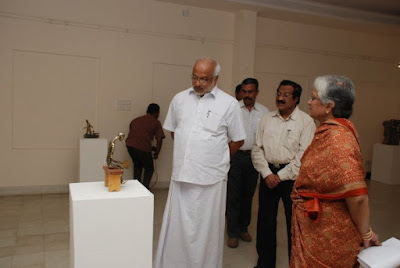 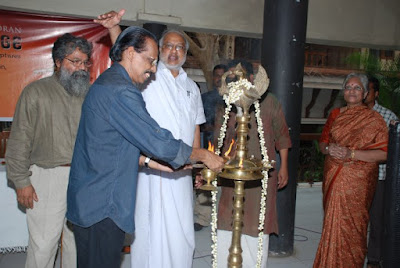 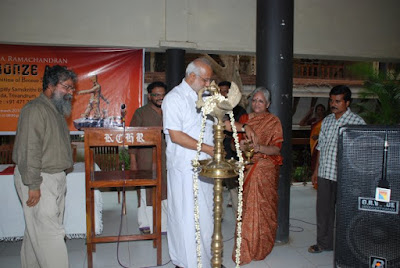 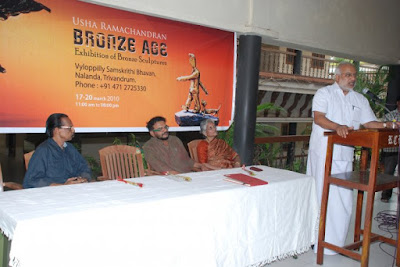 The Hon Minister for Education and culture,govt of Kerala making the inaugural speach.Shree Dethan and Shri Ajayakumar can be seen.

The Newspaper reports on 'Bronze Age'

An attempt to arrest motion

THIRUVANANTHAPURAM: Usha Ramachandran attempts to arrest motion in her sculptures. The ‘Shadow,’ for instance, catches a man walking his dachshund in mid-stride. ‘The Little Laundress’ - it’s the first figurine that catches your eye in the exhibition hall - freezes in space-time a young girl with plaited hair with the wash flaring like wind-blown flames above her. ``Sculpting is fun, real fun,’’ chirps the sculptor. The observation is quite interesting, considering that bronze sculpting must have been the last thing in her mind a year ago. `Bronze Age,’ an exhibition of bronze sculptures by Usha Ramachandran, will begin at the Vyloppilli Samskrithi Bhavan on Wednesday. Twelve pieces were on display at the preview held on Tuesday evening, all of which were crafted during the past year. In January 2009, Usha held an exhibition of her paintings, mostly acrylics and a few oils, at the Russian Cultural Centre. There she met V. Satheesan, an arts teacher at the Kendriya Vidyalaya. ``I asked him whether he could teach me sculpting. He said yes, but he must have felt I was joking. Anyway I called him a month later,’’ says Usha. Initially, she tried her hand at easy figures like fruits. Her first real sculpture was the ‘Mother and Child,’ a 10-kilo contemplative piece displayed at the exhibition. ``Sculptures are different from paintings in that the former is three-dimensional.’’ Usha uses the Lost Wax Method in sculpting. In this, the sculptor creates a ‘skeleton’ out of wire mesh (armature), then gives it sinews and muscles with wax. Then it is casted in bronze. ``Casting can take some time during the rainy season. During summers, you can finish one piece even in a week,’’ she explains. Usha draws her themes from everyday life, where everything is in flux - constant movement in time and space. `On a Rainy Day’ is typical. A bony man, his upper body bare, the lower part covered in a wind-swept `mundu,’ hurries. He protects himself from an invisible downpour rain with a wide leaf. Another of a similar theme is `Move On,’ a girl in hurry caught mid-flight. She might almost walk off the rock pedestal. There are also the `static,’ intense pieces, like `Kaathirippu’ and the untitled work showing a man immersed in his laptop. Or the one where a man, lying prone on a cliff-top, is heaving up another figure to the top. Born in Thalassery 60 years ago, Usha Ramachandran describes herself as a self-taught artist. Usha, who lives at Vattiyoorkavu, has participated in over half-a-dozen group art exhibitions. She also uses terracotta and fibre-glass as media. `The Little Laundress’ received a honourable mention by the Kerala Lalithakala Akademy. Education Minister M.A. Baby will inaugurate the exhibition at Vyloppilli Samskrithi Bhavan at 4 p.m. on Wednesday. The exhibition is on from Wednesday to March 20 daily from 11 a.m. to 8 p.m.trivandrum@expressbuzz.com

The Hindu Exhibition of Bronze sculptures by Usha Ramachandran at the Vylopilly Samskriti Bhavan in Thiruvananthapuram. Photo: S. Mahinsha

When Usha Ramachandran found V. Satheeshan, an artist and teacher ready to help her give shape to her memories and artistic talent, there was no stopping the sincere student. Her hands sculpted images that lay buried in her and thus were born the 12 bronze sculptures (titled ‘Bronze Age') that are on show at the Vylloppily Samskriti Bhavan.

Each work is a moment frozen in time and bronze. “I grew up in Thalassery and in those days from early morning to 11 a.m., we could hear clothes being washed in various households. 'The Little Laundress', which won an Honourable mention of the Kerala Lalitakala Akademi, shows a young girl in a petticoat washing clothes. Similarly, ‘On a rainy day,' (depicting a man sheltering himself from the rain with a colocasia leaf) captures a familiar scene in the countryside,” says Usha.

‘Father and son' captures a son's delight and trust as he is thrown high in the air by his father and celebrates the bond between the two; it also expresses Usha's memories of her father's homecoming every year. “He was in the army and we used to long for him to come home on his annual leave,” recalls Usha.

However, Usha's exhibition is not made of nostalgia alone. A man striding ahead, jacket flapping in the air, followed by his faithful Dachshund is ‘Shadows' while ‘Move On' has a girl running with her eyes on her watch, her plaited hair flying behind her. She says it symbolises the always-in-a-rush youth of today.

A pole vaulting athlete's grace and power have been encapsulated in yet another work while a man and woman fishing evokes the charm of companionship. “I feel art works should not be titled; it should be self-explanatory but many people keep asking me to name some of my works and so that is why some have titles,” she says.

Expressing her gratitude to her husband, Ramachandran, and her teacher, Satheeshan, she says with a smile that while her husband finances her expensive hobby and encourages her, it is her teacher who gives her the confidence and the know-how to do it.

The busy homemaker and mother of two says although she had wanted to paint and sculpt, she could find the time to do it only now. “I am nearly sixty and I began learning sculpture only last year. There is no time to be lost and so I spend a great deal of time on my painting and sculptures now,” she says with a smile.

Some Bronzes from "Bronze Age" 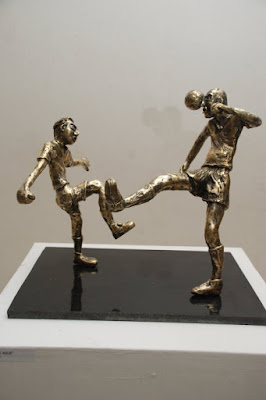 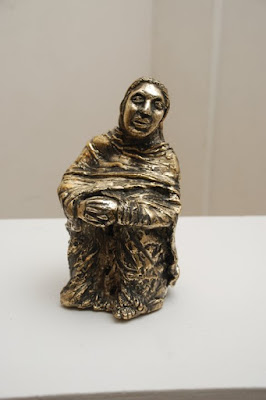 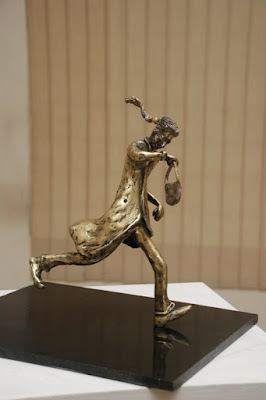 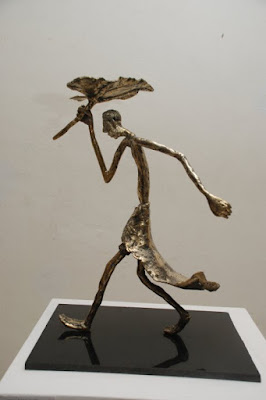 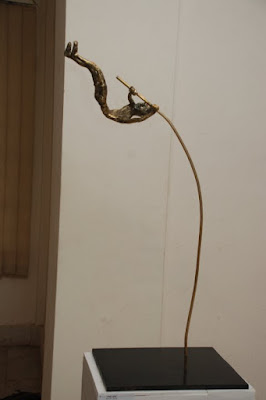 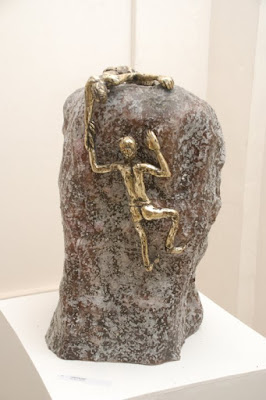 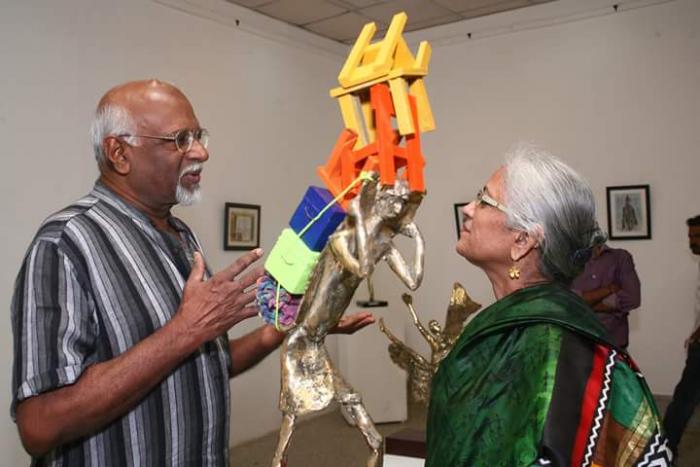